Movies like The Void don’t come around very often. Movies with this singular and strong a vision, untroubled by studio interference, in which the biggest name on the cast-list is Knives Chau from Scott Pilgrim, and with a central conceit built on mind-warping madness, must be celebrated and cherished and supported so we can, hopefully, get more of them in future.

You’ve probably seen the artwork on social media; that weird black triangle or the guys in the all-white hazmat suits looming towards the camera like a more sci-fi version of the KKK. Usually, such strong promotional material belies a fairly standard, even quite safe, premise that can’t live up to, let alone exploit, its potential.

The Void is not that movie. It’s just as insane and frightening and captivating and wonderfully weird as you’ve heard, and (thankfully) as its fantastic promo material suggests. The brainchild of the Astron6 boys (AKA Jeremy Gillespie and Steven Kostanski, purveyors of enjoyable schlock such as 2011’s Fathers Day, among others), the flick is truly one of a kind.

It’s unlikely we’ll see anything like this again in 2017. Nor would we want to. 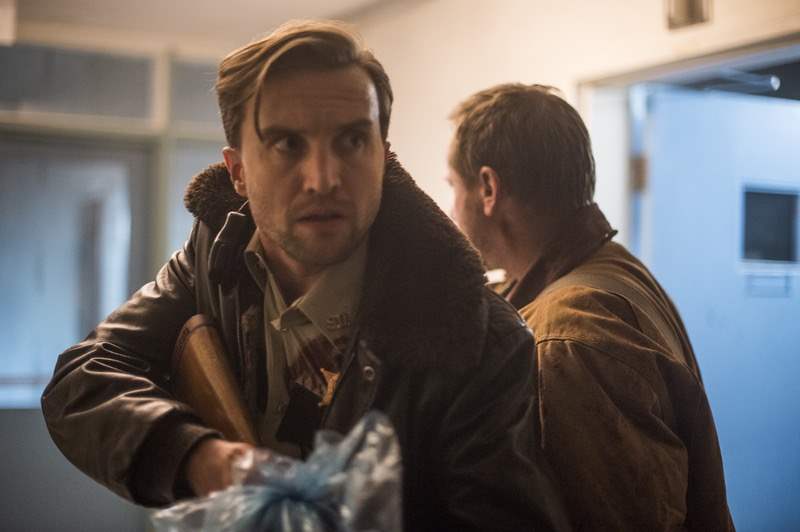 Set in a single location (a rundown hospital), the flick sees local law enforcement, nursing staff, townspeople and a duo of drifters – all of whom have more than a few secrets up their sleeves – take on a malevolent force over the course of one, fateful night. What the threat is won’t be spoiled here, but suffice to say it will equally satisfy gore-hounds and fans of the cerebral.

The practical FX employed within are a joy to behold, creatures emerging as modernised versions of The Thing‘s worst-nightmare creations. In fact, the movie could be seen as a reasonable accompaniment to Carpenter’s seminal horror movie, dealing as it does with the plight of one man (in this case, Aaron Poole’s lowly police officer) against an unknowable evil.

The Void boasts quite a few twists and turns to rival that of The Thing also, which is especially impressive given it clocks in at 90 minutes exactly (fast emerging as the ideal length for a low-budget horror movie). And it’s never entirely clear where each character’s loyalties lie, whether it’s a pregnant young woman about to pop or a smug randomer who’s inexplicably appeared.

There’s been a trend lately for single location (or mostly single location) set stuff in horror, the idea being that even the tiniest budget can accommodate a number of key scenes shot in the one place. This was perhaps best employed in Anthony DiBlasi’s chilling Last Shift which, funnily enough, would make for a fine double bill with The Void given their similarly dark tones.

Movies this nuts don’t usually play it straight and, although co-screenwriters and directors Gillespie and Kotanski imbue the proceedings with some jet-black humour and even a couple of well-placed genre nods (Night Of The Living Dead is being watched on TV at one point) they know better than to wink at the audience too much, or else they’ll risk not scaring us.

And The Void is very, very scary. It’s unsettling and weird and tense in a similar manner to The Thing, Last Shift or even Turkish shocker Baskin, which was nastier but no less limited by staging the action in one key location. But this is its own beast in a way that will make it a fan favourite in years to come, provided enough of us get behind it. So, seek it out immediately if not sooner.

And say hello to your new favourite horror movie.

Catch The Void On Demand and in select theaters (locations here)

Post Views: 97
Tags: Astron6, horror, New Horror Movies, the void, the void movie
Share This Post
Written by Joey Keogh
Slasher fanatic Joey Keogh has been writing since she could hold a pen, and watching horror movies even longer. Aside from making a little home for herself at Wicked Horror, Joey also writes for Birth.Movies.Death, The List, and Vague Visages among others. Her actual home boasts Halloween decorations all year round. Hello to Jason Isaacs.
Have your say!
00
Previous ArticleMary Shelley’s Timecop: The Bizarre Fun of Frankenstein UnboundNext ArticleGleeful Evil: Seven of the Cruelest Movie Monsters
You May Also Like